May 29th 2014 Modeling States and Transitions in Relational Databases

One common problem in software development is how to model states and the transitions between them in a database—essentially, to persist a finite state machine. The quintessential examples of this problem are version control systems, which save the state of files over time, allowing users to examine the exact state of those files at any given point in their history. We can think of the contents of files at various points in time as states, and the edits that were made to those files as the state transitions.

There are two basic ways to persist this history to disk: saving the transitions, or saving the states. Subversion takes the former approach, saving the transitions as the diffs of files, and using those diffs to calculate the actual contents of the files at given points in time. Git takes the opposite approach, saving snapshots of the file contents at discrete points in time, and using those snapshots to calculate the file diff that led to another snapshot.

But which system is best?

For a while, I worked for a startup that specialized in allowing users to purchase and trade digital cards. (Think baseball card collecting, but online.) Originally, the application modeled trades as a series of trade events. A trade could be in one of four states, which corresponded to the actions users could take on those trades:

Trades could also be countered by the recipient, although this was not modeled as a fifth state; rather, it was modeled as a trade with the offeror and recipient flipped.

The entire flow can be illustrated with a relatively simple state diagram: 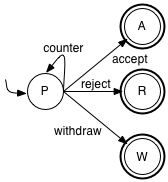 Offering a trade created a trade event (a Trade object) with a status type of “Offered” in the database; when the recipient of the trade offer did something with the trade (accepted or rejected it, for example) another trade event was written to the database. In other words, each possible state was represented as a separate Trade object. Here’s a (simplified) diagram of the object model used in this system:1 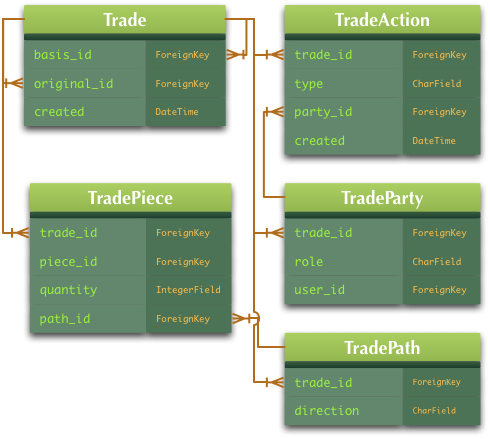 This system was nice because it created a log of the trade’s events, but due to the way it was modeled, as well as the requirements of the application, querying the database for trade information was very inefficient. Specifically, it required a lot of joins simply to get the final state of a trade, and even getting a specific user’s pending trades—an essential feature of the application—was slow. Querying for a user’s incoming trades (that is, trades that they had been offered but not yet acted on—state P in the diagram above) required a query like the following:2

Getting the items being offered in a trade was also not easy—even for a single trade:

Worst of all, that query had to be done for every incoming trade.

Obviously this system, despite how mathematically beautiful it may have been, was inefficient, and not scalable for the number of users on the site.3 I was tasked with improving this module’s performance. And that led to one of the most embarrassing bits of code I’ve ever written.

I rewrote this code to be mutable, modeling the flow like this: 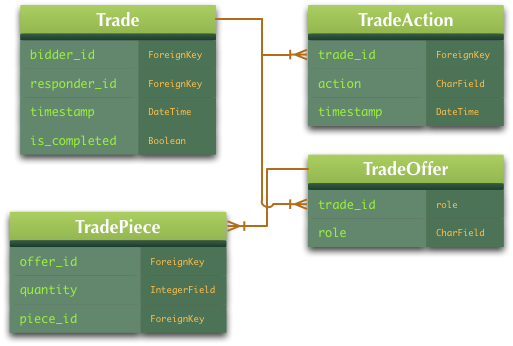 Many queries became much more efficient (and less complex to write, which is a secondary concern, but still important—if your programmers don’t even understand how to read and modify your queries, you’re in trouble). Getting a particular user’s incoming trades was fairly straightforward:

Unfortunately, as it turns out, getting the items offered in a particular trade was not that much easier:

And that was just the start of the problem. The new way of modeling trades was very inflexible, and the code for managing the state of trades in the database was much more complex and even harder to reason about.

Events would actually mutate fields in the trade model. This made it easy to get the final state of the trade, as well as to retrieve a given user’s incoming and outgoing trades, with relatively simple SQL queries, but it raised a lot of new problems:

The new module was not an improvement; in fact, it was a nightmare that caused me no end of headaches.

Rather than trying to capture all the steps that led from one state to another, we can take Git’s approach and snapshot the trade at each step along the way; knowing the final state at each step, we can infer the action that led to that state fairly easily.

Like the original system, each trade object will have a link to another trade, allowing us to walk through the history of the trade (which gives us an audit trail and allows us to show the history to the user, both requirements of the system). Which way should the links go, though? To the next state, or back to the previous one? Just like Git, we’re primarily interested in the final state of the trade, and in the rare case that we need the history, it’s acceptable—even desirable—to walk backwards through it. Also like Git, making links point back in time, to the previous state, means we don’t have to modify old records—we just create new ones.4

With that design decision out the way, we can plan out our database schema:

Retrieving the cards offered to a user still requires a number of joins, but it seems from our exhaustive analysis that this is unavoidable:

A Tangent on Optimization

There’s one interesting model in our database schema: the TradeOffer, which consists of nothing more than a database ID. It looks like the through table for a many-to-many relation, but you’d expect to see a structure like this:

So why the odd structure? Recall that our system includes the notion of a countered trade, which occurs when a recipient modifies the items offered in a trade and re-proposes it to the original offeror. Instead of having a separate status for a countered trade, we treat a countered trade as a rejected trade, following by a proposed trade. (We can identify countered trades because they are the only trades that have a status of proposed and a link to a previous trade.) If we had a more traditional many-to-many through table, we’d not only have to modify the Trade when creating a event, but we’d also have to create an entirely new TradeOffer object. Using the “weird” structure, we simply have to update the offeror_offer_id and recipient_offer_id links when creating a new Trade.5

It’s worth noting that this does not necessarily improve the performance of our database queries, but it does serve to make our theoretical application code a lot cleaner. Optimizations are not always performed for the benefit of database performance, or even code performance; writing cleaner, potentially less buggy code is a benefit of some optimizations as well.

Modeling events and the transitions between them is a frequent problem for software developers. They’re concrete instances of those finite state machine models that were drummed into you during your computational theory classes. And it’s easy to get the persistence layer of those models wrong. But with a bit of knowledge and a lot of requirements gathering (one of any developer’s most important jobs), it’s easy to the model right.

Maybe you’ll even get it right on the first try.