Apocryphally speaking, a snuff film is a film that depicts the actual death of one of its actors. So what do you call a film (outside of pornography) that depicts an actual sexual act? In the case of Vincent Gallo’s The Brown Bunny, I believe you’d simply call that film “terrible”. 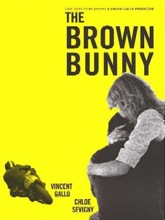 The Brown Bunny is the story of Bud Clay, a motorcycle racer who takes a cross-country road trip to forget about his lost love, Daisy. And…that’s it. One sentence, and I’ve already described the plot in about as much detail as the film itself. This does not bode well for The Brown Bunny. In a way, it reminds me of movies based on Saturday Night Live sketches: they’re a good idea for three or four minutes, but when you stretch them into 120, they’re like month-old bread pressed onto celluloid. Unfortunately, The Brown Bunny isn’t a comedy, and so it doesn’t have lowbrow humor to redeem the bland plot.

In fact, it doesn’t even present a good script to save itself. The sparse dialogue that exists in The Brown Bunny is stilted, like middle schoolers trying to flirt at a dance; Gallo clearly mistook unnatural for awkward. This, combined with the subpar acting (which mostly consists of Gallo painting an emotionally distraught mask on his face), is probably why talking was kept to a minimum. Gallo apparently never learned to apply the maxim “show, don’t tell” to dialogue, because when the characters do have something to say, it’s a direct description of their mental state. Imagine a child caught up in an adult relationship: “I’m so hurt. I hate you. Why did you hurt me?” It’s a film a five-year-old could relate to, if a five-year-old had a girlfriend who did crack cocaine.

I’m not even sure what I’m supposed to feel after watching The Brown Bunny. The two main characters—Bud and his lost love, Daisy—aren’t likable, and have so little depth (and so little dialogue) that I never get a sense of who they are. Their romantic reactions are so immature, like seventh graders trapped in the bodies of twentysomethings, that I can’t take them seriously. (I could elaborate more on this point, but that would spoil the end of the film, which hopefully you’ll never make the mistake of renting from Netflix, especially if you’re on the one-DVD-at-a-time plan.) “Cathartic” is not a word applicable to The Brown Bunny.

Really, the movie has all the trappings of a self-indulgent one-man show. It even features long shots of the main character doing nothing but racing around on his motorcycle. As a writer, I understand that scenes sometimes go off on tangents in order to build character, but Bud’s racing literally has nothing to do with who-he-is. He could’ve been a businessman or a writer or even a Burger King employee, and the movie wouldn’t have been any worse (or better, for that matter). Then again, by the middle of the film, I just wanted to break out of the van in which Bud spends most of his time, so zipping around the Nevada salt flats on a crotch rocket was like a morphine drip for boredom.

The Brown Bunny was shot on 16mm film and blown up to 35mm, giving it a grainy look that lends the film a ’70s atmosphere, especially when coupled with the mournful, horn-based soundtrack. This technique—deliberately shooting the film to look grainy—is often used in documentaries. Gallo couples the old-school grain with long shots that ostensibly exist to build tension or create a sense of isolation, but more often than not are just boring.

But in a way, these things—the grainy, homebrew camera work and nonexistent dialogue—actually sort of work for the film. The cinematography and facial expressions by the actors (excuse me, actor) are often enough to convey the emotion that is so lacking in the script. By the end, I was actually impressed that the film managed to provoke an emotional response (albeit one as far from climactic as you can get) without actually saying anything.

Of course, the primary emotion depicted in the film is that of heartbreak, and that’s pretty easy to show on camera. One my writing professors once said that it’s easy to show characters in love, because we identify with standard symbols: two characters enjoying an activity together, moving in together, getting engaged, getting married. It’s harder to show people falling in love; thousands of years of poetry and literature haven’t quite managed to nail down the precise nature of romance. As my own corollary, I’ll add that it’s easy to show characters bitten by the serpent of bitter romance. We’ve all experienced heartache, and we can all look sad. So maybe I shouldn’t give Gallo that much credit.

When released, The Brown Bunny generated quite a bit of controversy (in addition to audible jeers it received at its Cannes screening). Notably, it depicts an unsimulated act of fellatio between Gallo and Chloë Sevigny (of Boys Don’t Cry fame), a scene that got Sevigny dropped by her talent agency. Still more controversy was generated by a still shot of that scene that appeared on a billboard over Sunset Boulevard in Hollywood. That Gallo resorted to such visceral stunts attests to the flimsy foundation propping up the film. And no, that blow job does not make the 119 minutes of the film worth it. In fact, it’s not even worth your time to skip to the end (although if you did, the film would make just as much sense). Yes, it does neatly serve the purpose of illustrating the characters’ awkward relationship, but in typical Brown Bunny fashion, Gallo elected to tell rather than show.

After Roger Ebert panned The Brown Bunny, he and Vincent Gallo infamously had a verbal brawl over his review. Well, to paraphrase Ebert, I might just be some blogger who gets a handful of hits per day, but Vincent Gallo will always be the director of The Brown Bunny. And that’s not a trophy you want to put up above the mantle.