My dad is a connoisseur of old comedies. I grew up watching the “classic” comedies of the 70s and early 80s: Tootsie, The Toy, Smokey and the Bandit, and the like. Although it seems my dad stopped watching movies around 1984, his taste in “antique humor” cannot be denied. One of his favorites was the 1981 Dudley Moore/Liza Minelli production of Arthur, a movie I’ve probably watched at least a half dozen times. So my interest was slightly piqued when I learned that Warner Bros. was producing a remake starring Russell Brand. 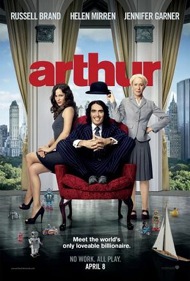 Arthur centers around millionaire playboy Arthur Bach, a thirty-something alcoholic heir to $950 million who throws grandiose, booze-filled parties and wakes up with a new broad on a regular basis; consider him a tamer, more boyish Charlie Sheen. After embarrassing his mother Vivienne (Geraldine James), he is ordered to marry socialite Susan Johnson (Jennifer Garner), who his mother hopes will force him to settle down. Unwilling to risk his inheritance, Arthur goes along with the plan until he meets Naomi (Greta Gerwig), a working-class woman from Queens. No doubt you can guess where this is going: Naomi’s homespun charm provides the perfect antidote to Arthur’s bourgie lifestyle, which interferes with Arthur’s impending marriage—and, more importantly, his inheritance.

I’m not spoiling anything by saying that Arthur does not rely on a surprise ending. There’s one minor hiccup dealing with his nanny Hobson (Helen Mirren), but even that’s fairly predictable. But comedies are generally more concerned with the journey rather than the destination, and Arthur is no exception to the rule.

Does Arthur deliver on that journey? My initial reaction is to give a qualified yes. Qualified, because the movie is funny, but it doesn’t bring any new or unique comedy to the table. A few one-liners could be filed under “W” for “witty”, but overall the film is the raunchy, slightly puerile humor you expect from mainstream comedy. But hey, sometimes on a Friday night, that’s exactly what you need.

Although I’ll always have a soft spot for Steve Gordon’s Arthur, it’s not exactly a movie that was begging to be redone, and I didn’t have high expectations for Jason Winer’s reconstitution of the 1981 formula. At best, I figured that the remake would be like a bad car accident: I’d stare out of morbid curiosity, and then be scarred for a while afterwards. Indeed, I only saw the film last night because we’re in the cinematic doldrums between the farce that is the Academy Awards and the commercial glitz of summer blockbusters, and aside from Jane Eyre, there’s not much I’m interested in seeing this week. (Even the independent theaters in Manhattan aren’t playing anything terribly compelling.) My choices boiled down to Arthur, Water for Elephants, and the latest Tyler Perry schlock, so I can’t be held responsible for my actions.

I can’t say with a straight face that I’d seriously recommend Arthur to any of my friends, but if you’re looking for something to do on the weekend and don’t have a lot of options (either because you’re jaded by New York or live in, say, rural Pennsylvania) then Arthur may just round out your weekend.