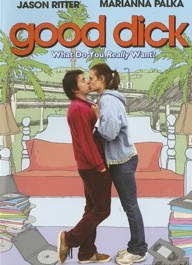 Netflix is convinced I’m some sort of film hipster, going so far as to create a category for me called “Quirky Independent Suburban-Dysfunctional Movies”. The thing is, Netflix is usually right. In fact, its recommendation of Good Dick—a movie that Netflix predicted I’d like with the zeal of four stars—is but one major failure in a string of brilliant successes. It’s not Netflix’s fault, though: based on the cover art, it appears to be a witty, charming romantic comedy in the same vein as Juno. The person who said you can’t judge a book (or a DVD) by its cover must’ve foreseen Good Dick.

Good Dick is primarily shot in two locations: a video store, and the girl’s apartment. I’d like to think the director wanted a challenge like that of Twelve Angry Men, but she was probably just trying to economize on sets. She certainly didn’t splurge on casting, either: the entire cast consists of cheap plastic knockoffs of blockbuster movie stars. The female lead (also Marianna Palka) is a low-cost copy of Kristen Stewart, who’s already the Wal-Mart edition of a good actress. There’s also a photocopy of Seth Rogen (although the real Martin Starr appears in the film, in case that matters to you). If those star-studded templates were Legos, the cast of Good Dick would be Mega Bloks.

Good Dick is ostensibly about the nature of sex in relationships, but it does little more than scratch the surface of what is generally an interesting topic, and the characters approach this subject with all the complexity and nuance of middle school students.

All this would be acceptable if the film were witty, or at least quirky, but I’ve heard sharper dialogue in Will Ferrell movies. To wit, here’s the climax to a scene in which the main characters are debating the physical appearance of penises:

The whole movie feels like Palka’s fuck-you to all the guys who didn’t get her “dark” personality and couldn’t find her clitoris (yes, they talk about that in the film, too). And therein lies the problem with even critiquing this film: it’s awkwardly personal. It reminds me of workshopping short stories in my college creative writing courses. It flows like a love story written by a frustrated college sophomore who wanted an artistic way to explain why she hadn’t had sex in a long time, when the real reason was her shitty—pardon me, brooding—personality. Good Dick speaks from the heart, but it says something no one but the writer cares about.

Leveling that criticism should probably make me feel guilty, because in the film’s climax you find out that the main character was sexually abused by her father (I’m not spoiling the ending: the director wishes you didn’t find out until the end, but even the densest of viewers can deduce that in the first fifteen minutes). But I don’t feel guilty, because Palka depicts the abuse in such a ham-handed way that it’s clear her only experience comes from Lifetime movies and 20/20 specials.