The fall is by far my most favorite season of the year. Perhaps that is because my birthday occurs in this month, but my preference for autumn transcends that egotistical reasoning. I love fall because the weather is perfect: crisp, clear, not yet freezing, but not too hot either. It’s the perfect time to go for a stroll and admire the colors of the leaves on the trees, which is exactly what I did last Sunday. And I have the photographs to prove it! 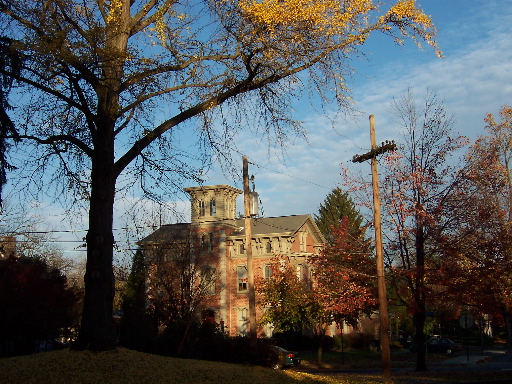 Here is Cooley Hall, one of the administrative buildings of Bucknell University (the college I attend). The bare tree out front and the setting sun signal one thing: autumn has come to Lewisburg! 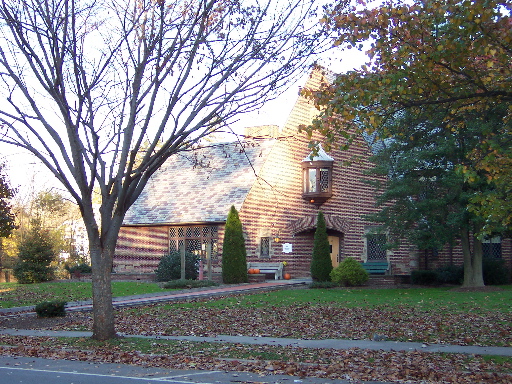 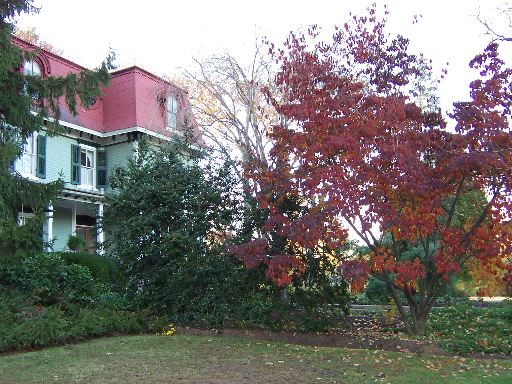 A house a few doors down and across the street from Cooley Hall. Notice the vibrant red of the tree. Fall has come! The barn behind this house was once used to shelter runaway slaves on the Underground Railroad. The mighty Bull Run flows nearby. 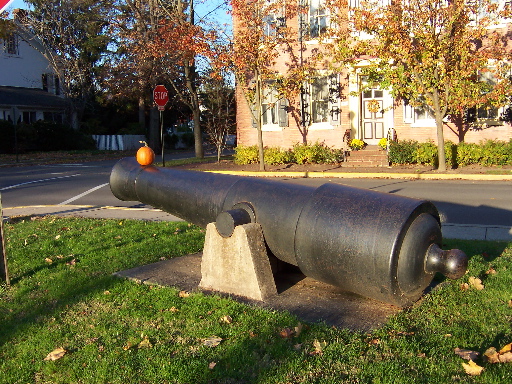 This cannon is part of a monument to fallen soldiers. Evidently someone thought it might be nice to decorate it for Halloween. 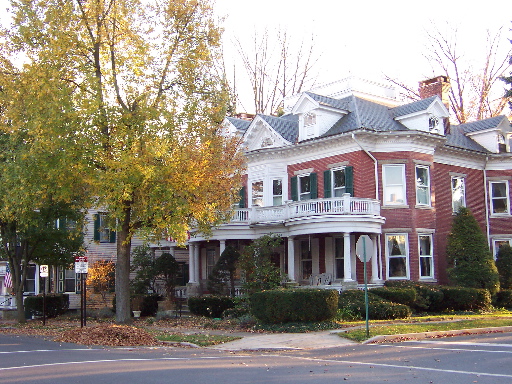 This house stands on the corner of South Third and some other street whose name I forget (it’s the one that is a block north of St. George Street). Not only is the architectural design of the house interesting in and of itself, but the colorful tree and leaf pile out front serve to remind us that it is indeed fall. 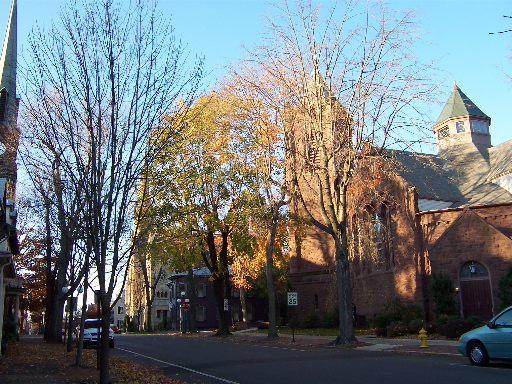 The beautiful architecture of Lewisburg never ceases to amaze me. Here we see two churches surrounded by the bare branches and fallen leaves of the trees that line South Third Street. 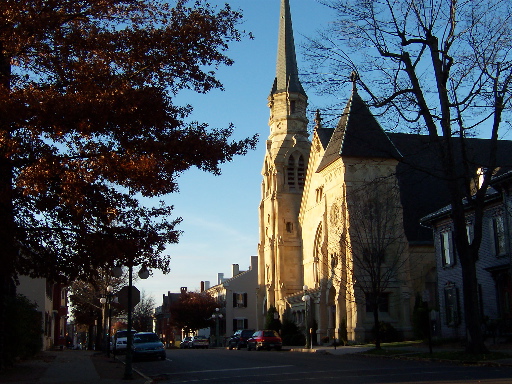 Another view of a church downtown, this time with the setting sun illuminating its western face. 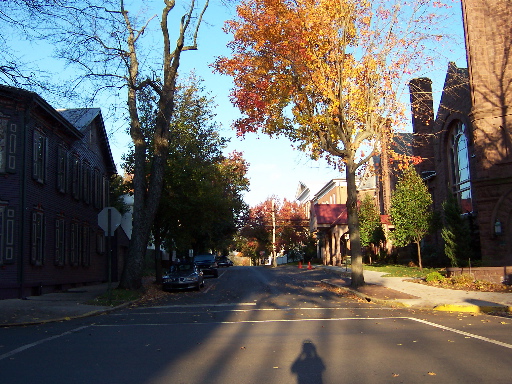 A view of the fall foliage along St. Louis Street. That’s me casting the shadow at the bottom of the picture! 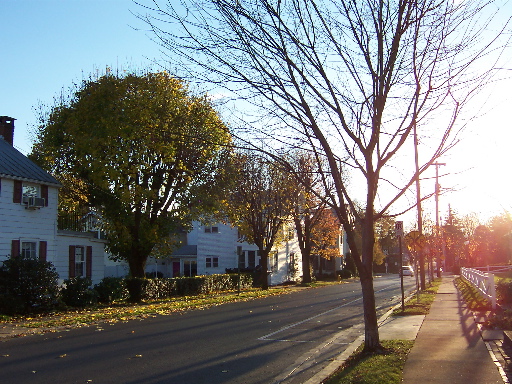 A view of St. Louis Street facing west instead of east. Isn’t the setting sun the perfect backdrop? 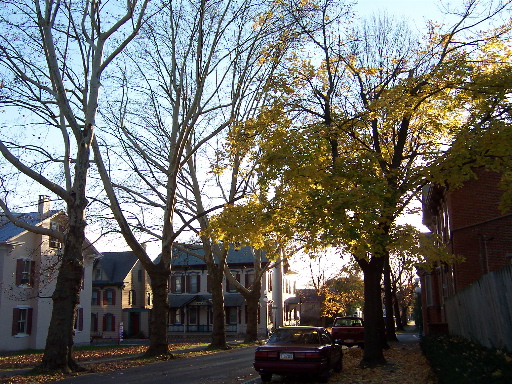 Most of the trees on this block have already lost their leaves, but a few still cling to their branches. I guess someone will have fun raking up those leaves this weekend. Maybe some kids can build a pile and spend an afternoon jumping into them! 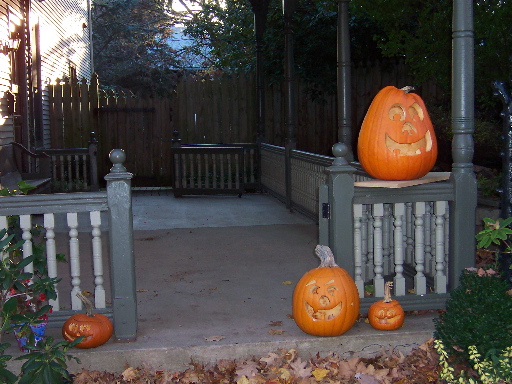 It’s Halloween (almost)! Someone surely had a lot of fun carving these fine looking pumpkins. It’s a shame that they will soon rot into distorted faces, but such is the cycle of life and death. I’m lucky to have gotten a photo before these pumpkins were lost forever. 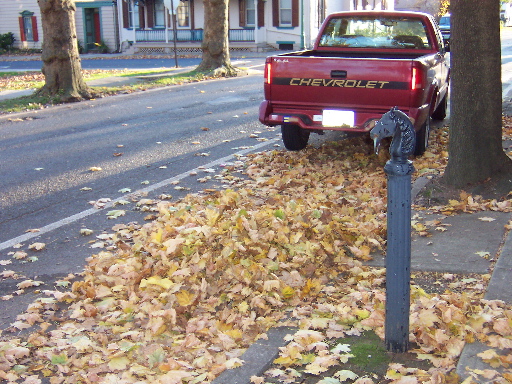 These hitching posts are littered throughout Lewisburg. Back in the nineteenth century, horses were tied to them. We don’t have any horses to tie to them anymore, but they’re still a nice decoration from a bygone era. 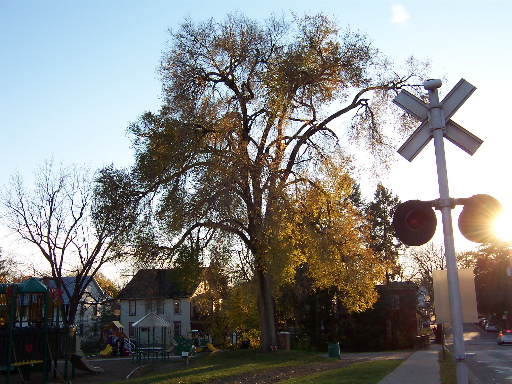 A tall and mighty tree that stands in the local park, illuminated by the sun setting in the background. 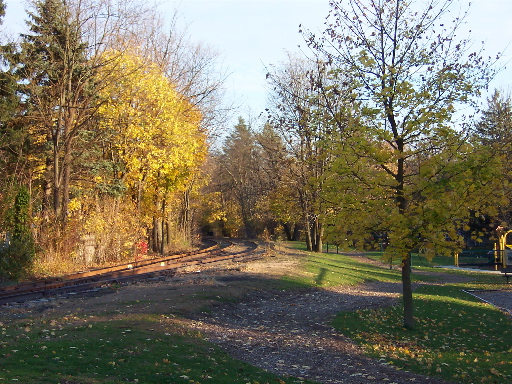 A seldom-used railroad that runs by the park. The trees would provide a scenic ride if the passenger train was still in service. 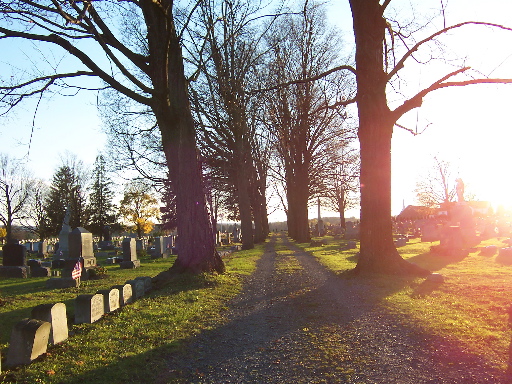 My meanderings brought me to the cemetery in the southwest section of the town. Although we mustn’t forget the somber nature of a cemetery, the tree-lined gravel roads and setting sun provided a perfect picture opportunity to highlight the beauty of the fall season. 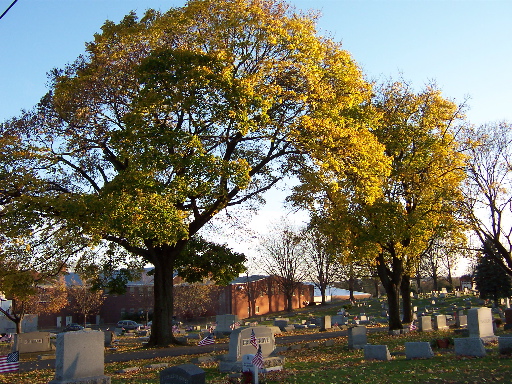 Even the cemetery cannot keep the autumn season from encroaching. How poetic that just as souls are laid to rest here, so, too, do the trees shed their dying leaves until spring rejuvenates their branches. 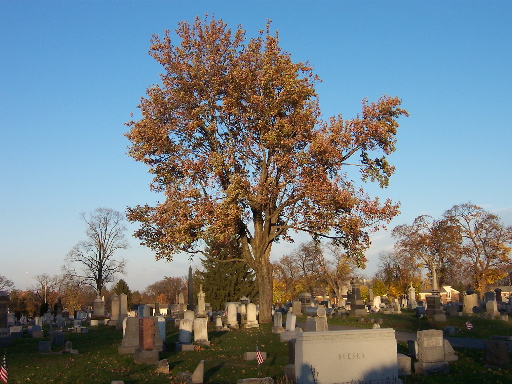 A lone, but mighty, tree that stands in our cemetery. 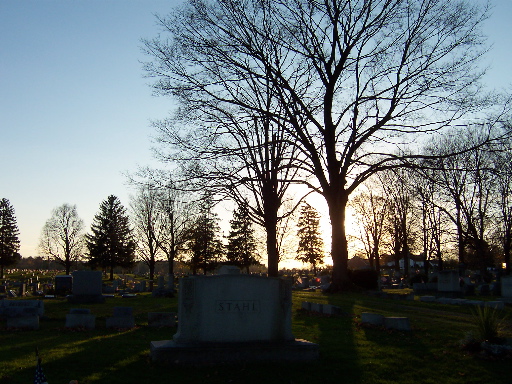 Another image of the sun setting behind the horizon, with the cemetery in the foreground. 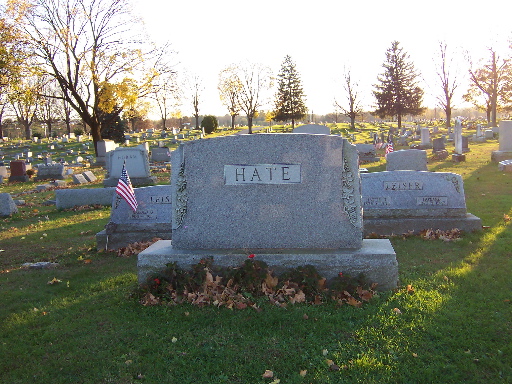 Hate is dead! It’s time to love one another again! 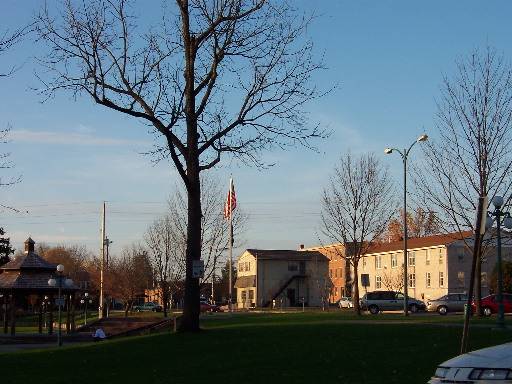 You have to admire the flag’s resilience: even after the unfortunate re-election of George Bush, it still flies high and proudly!